My first stop for my two-weeks in Europe was Belgium. Come tag along! 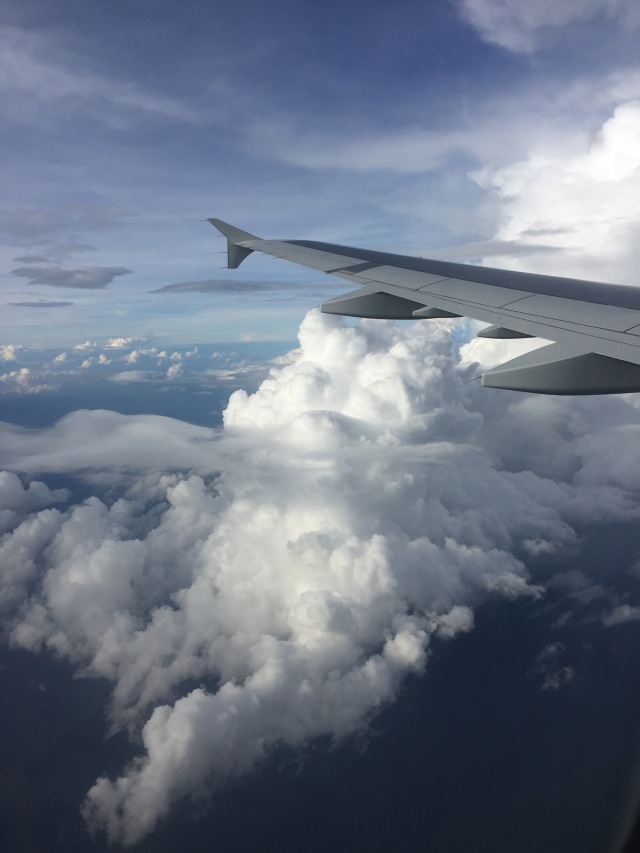 Lucky for me, I had zero jetlag from my flight to London the day before. I woke up at 6:30AM in Belgium, opened my window, and found it to be raining outside. I got ready, had some breakfast, and then went to meet my tour group…an hour early…oops. Still trying to work out the time changes, I was happy to be early rather than late!

Despite my bumpy start, my day and the weather, soon began to clear up. 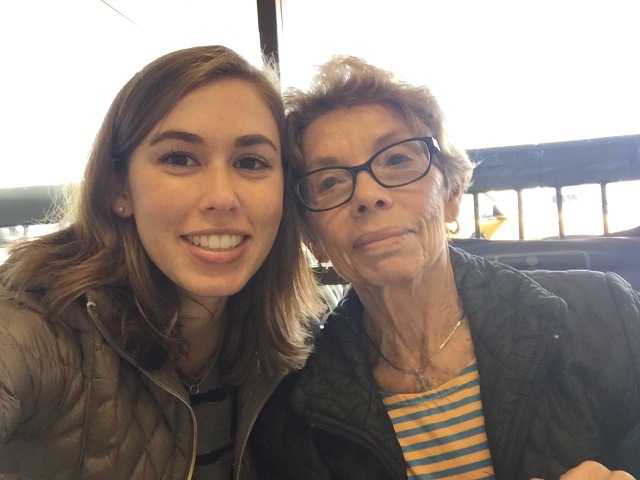 I opted for a river canal excursion with Princess Cruise line. As my grandmother, who I was traveling with, was not going to be going into port with me, I figured being with a tour group would be the best way to travel. We first got at a little tour to Zeebrugge, the port city we docked in. Zeebrugge was originally a military port, but after World War II it transitioned to a business port. With a bus drive lasting a little over an hour to Ghent, we learned lots of facts about Belgium.

Here are some of my favorites:

Once we arrived in Ghent, we started a walking tour of the town. Our first destination was the Three Towers near Ghent’s Historical Center.

Unfortunately, we only went in one of the three towers, and even there we did not get to enter the church as Sunday mass was being held. Interestingly, at part of St. Nicholas’ Church becomes an indoor market during the weekend.

Cruise line tours really come with a boatload (excuse the cruise ship humor) of pros and cons. The pros are that all of the complications of travel planning are removed. Your transportation is set for you and you have a guide that shares interesting facts about the city. And, my personal favorite feature, you are guaranteed to not miss your ship’s disembarkment. Unfortunately, booking a tour often means loosing the majority of your freedom to see what you want, when you want. Like on this tour, we only saw one of the three towers before it was on to the next event.

With the Three Towers behind us, we set out for a canal cruise. Walking along the canal’s side, we saw some very interesting buildings, including this one that once was used to collect taxes. 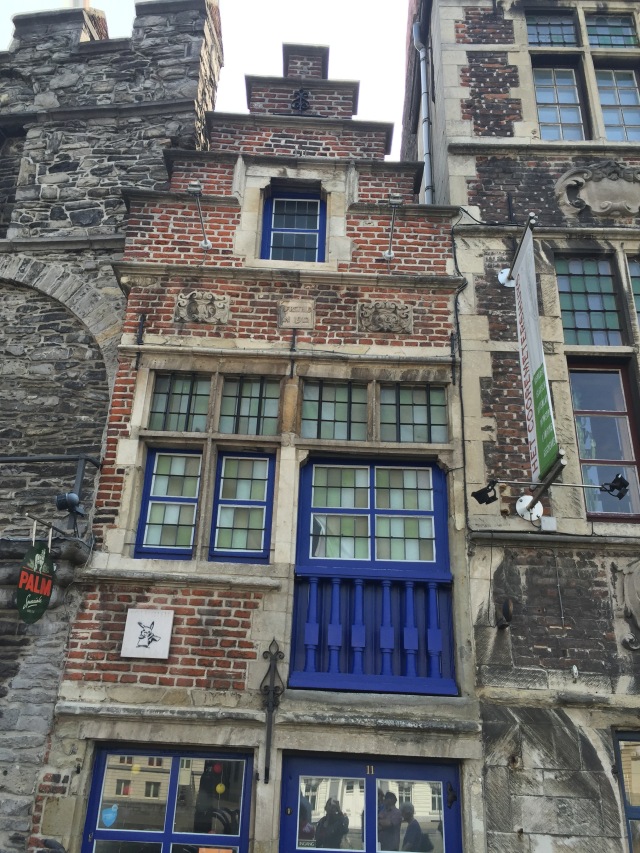 We also stopped by the smallest building in Ghent, which once was just an alleyway, but is now a house!

The funny thing about Ghent is that many of the buildings have an original exterior but a modern interior. They demolish the entirety of the building except for the front-facing wall. Ghent has also been constructing many of their new buildings to match the style of their ancient ones, including the post office. Due to this, Ghent has been dubbed the unfortunate reputation of being “fake.” 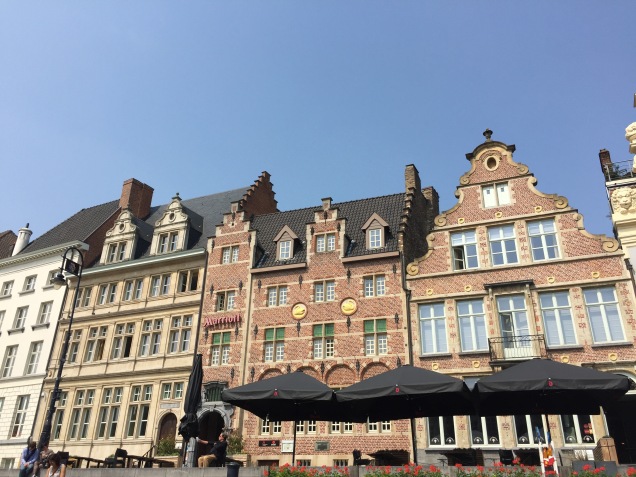 Our group of 30 loaded up on a motorboat and took off along the Lieve canal. The sights were absolutely fantastic. Much like Denmark or Amsterdam, the buildings were colorful and dotted with flowered windowsills. We saw many people biking along the canal, some stopping for a beer along the water’s edge. 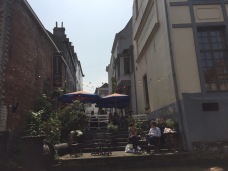 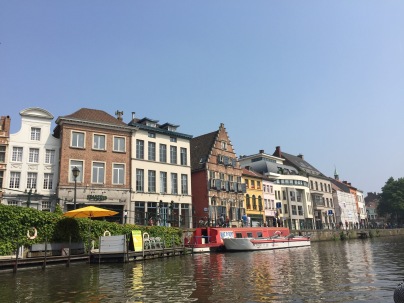 We saw some beautiful and interesting statues, like this of the Angel Rafael wearing a gas mask and shaming the citizens for polluting the Earth. 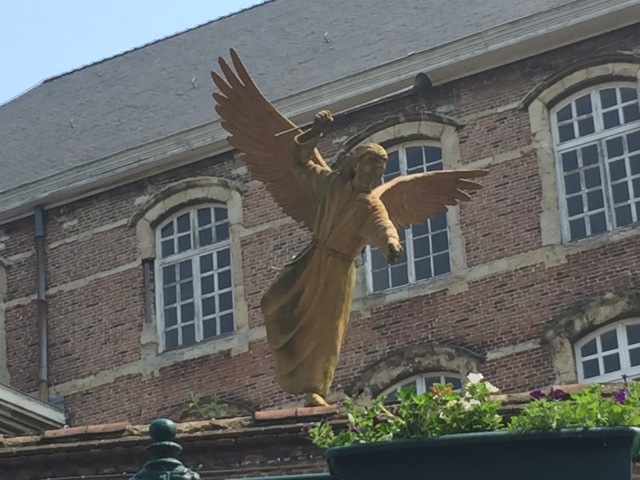 We also passed the Castle of the Counts, which was once over taken for a day by the students of Ghent University when the price of beer doubled overnight.

As it was a Sunday, the canals were pretty busy and we actually got in a fender-bender with another vessel. This might have been because almost everyone was drinking while boating. Most were relaxed vessels, with people sipping champagne and eating out of picnic baskets. But, we also passed by a party boat where they were BBQing and a bridal shower canal tour where the women where wearing tops like, “I said Yes,” “That’s What She Said,” and “He liked it so he put a ring on it.” 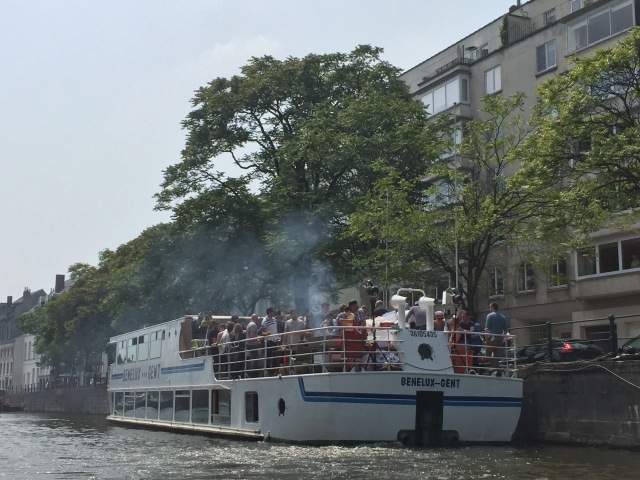 After an hour’s boat ride, we were given free time to wander. This has become a must for me now. Through all of my travels, my favorite experiences have developed through time to explore on my own. Belgium was no exception. I decided to spend my hour of free time searching the streets for a place to get a Belgium beer.

The first thing I did was ask my tour guide where he recommended. I promptly then went somewhere else. I know, probably not the ending you were expecting. My logic is this: if the tour guide recommends this place, then it will likely just be filled with tourists. I was searching for an authentic experience so I would have to venture off the beaten path. 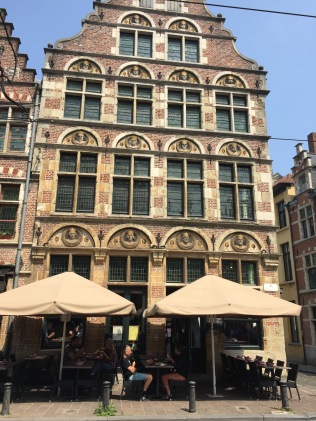 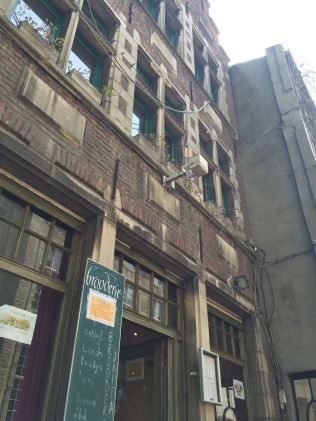 After checking out three different restaurants, I finally settled on Brooderie, a Mediterranean café. I ordered a blonde brew of a local Ghent beer. I might have been influenced by my surroundings, but it was one of the best beers I have ever had. I can only imagine how much better it would taste fresh from the tap!

To go with my brew, I ordered hummus and falafel tapas. Although not a traditional Belgium dish, this was the perfect little meal to enjoy while sitting outside and people watching. Apparently I looked like a local because multiple times people began speaking French to me, which I unfortunately do not understand.

Ready to head out, I asked for my check with my credit card in hand. I was soon informed that the perfect café I had chosen so carefully was cash only and, as I was spending two weeks visiting eight countries using six different currencies, I was relying on VISA only. Luckily, I was able to agree on a price in U.S. Dollars to pay for my meal. Most important lesson of the day: ask if they accept credit cards before ordering.

I then rejoined my group and we sailed down the Leie canal. We were blessed with beautiful, sunny weather.

And just like that, my time in Ghent came to an end. We were all ushered back on the bus and started our journey to Zeebruge. By the time we made it back to the ship, it was only 2:30PM and our ship was not set to disembark until 5:30PM. Unfortunately for me, there was nothing but containerships in a walk-able distance from my boat.

Disappointed that my single day in Belgium was coming to a close hours earlier than I expected, I pepped myself up with a fruit tart back on board.

Some of you might be wondering why I did not opt for a tour of Brussels, the capital of Belgium and the European Union. The main factor for me when picking my excursions was distance to the event. Traveling to Brussels would involve a 2-hour drive each way. Spending four of 9.5 hours sitting in a bus would offer little more than good views. I decided that taking on a smaller city might be the best method, especially considering the time constraints. This left me with the choice of Ghent or Bruges. I opted for Ghent because, according to Travel and Leisure, it is in the top 25 best city to visit in the world. I guess I will just have to go back to Belgium in the future to see Bruges and Brussles!

Have you been to Belgium before? Is it on your list? Let us know below!

7 thoughts on “A Day in Belgium”